The first phase of the project was ITV Classes in mid-May during which the participating students from Winona State University and Diné College met each other and began building understanding before the field work began.

Phase 2 consisted of the fieldwork at Diné College in Tsaile, Arizona, on the Navajo Nation. For nearly three weeks students from both schools worked together in teams to interview Navajo elders and create documentary films about the elder's lives. Phase 2 ended on June 11, as the WSU group loaded its van and large SUV with all their gear and luggage and drove back to Albuquerque Airport for the return to Minnesota. 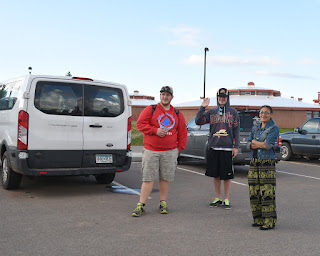 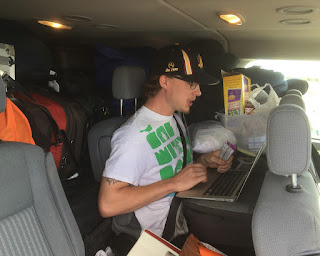 Bringing Phase 2 to a close was difficult. On Thursday, June 11, the WSU Group gathered in the parking lot outside the residence hall at Diné College and loaded their gear while saying goodbye to their Diné College faculty and fellow students. 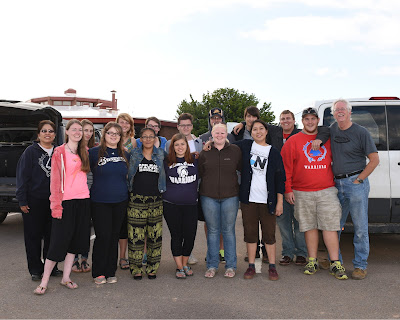 Above photo by Ben Haskie.

Navajos don't really say "goodbye." It's too final, and doesn't fit well with the circular feeling of Navajo spiritual life. Instead, they say "hagonee" (pronounced: Hah-go'-neh) which doesn't perfectly translate to English, but roughly means something like: be well until I see you again.

So the WSU and DC students said "hagonee" to each other, and will see each other again via ITV and in-person when the students travel to each other's campuses for the film premieres.

Now, Phase 3 begins, with more ITV work and video-conferencing to complete the videos.

The final part of the project will be the reception in mid-September to premiere the student-produced films. The film premiere event at WSU will be held on Thursday, Sept. 10 at 5 p.m. in the Atrium of the Science Laboratory Center. The premiere at DC will occur on Monday, Sept. 14, beginning at 5 p.m. in the Student Union Building at Diné College's Tsaile, Arizona, campus. These events are free and open to the public.