The 2012 Navajo Oral History project is complete.  The students of Diné College and Winona State University that created the documentary films on the lives of Navajo elders, premiered their projects at receptions in mid-September on both campuses.

The students, working in collaborative teams during June 2012, provided service work for the elders, then researched, wrote, filmed, edited and produced documentary films about four Navajo Code Talkers, and one long-time employee at Diné College.

Those featured included Chester Nez, of Chichiltah, New Mexico, the last surviving member of The Original 29 Navajo Code Talkers.  Chester was part of the first group of young Navajo men who were recruited into the US Marine Corps in 1942 to create a code, based on the Navajo language, for use in the Pacific Theater of World War II.  Those Original 29 Code Talkers then took their code into battle.  The code was never broken and surely helped shorten the war, save lives, and secure victory for the United States.

The Diné College employee featured is Agatha Spencer of Chinle, Arizona.  Spencer was a new employee at Navajo Community College in 1968 as the first Tribal College in the U.S. was created. She has served as an admissions counselor and program coordinator for the school -- now known as Diné College -- since then.

The journalism project is part of a multi-year collaboration between Winona State University (Winona, Minnesota) and Diné College (Tsaile, Arizona).  Through the Navajo Oral History project, students get real-world, in-the-field experience using and refining their journalism skills.  They also learn across cultures, and help to document and save for historic purposes the life stories of Navajo elders.  The project is directed by Dr. Miranda Haskie, professor of social and behavioral sciences at Diné College, and Dr. Tom Grier, professor of mass communication at Winona State University.

Copies of the DVD are available for purchase, with all funds from sales going to a scholarship fund at Diné College.  Information about purchasing the DVDs is available from Tom Grier; email: tgrier@winona.edu.

To aid in the dissemination of the interesting and important stories of the elders, the videos have been made available for viewing via YouTube. Those interested can visit the YouTube web site and enter Navajo Oral History or the name of one of the elders into the search box and follow the link to the videos.

These Living History films are 15-20 minutes long. The shorter (3-5 minutes) Media Feature versions of the films are also posted on YouTube.
Posted by DoctorTom at 10:14 AM No comments: 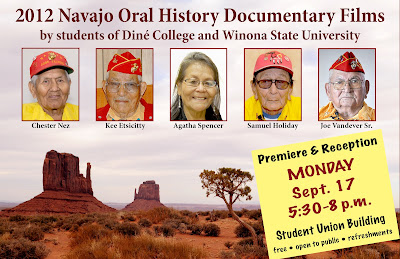 This event is at Diné College's Tsaile, Arizona, Campus in the Student Union Building's activity room.

The Winona State University Mass Communication department has been in a long-term partnership with Diné College, the tribal college of the Navajo Nation. That partnership has resulted in tremendous opportunity for both Winona State and Diné College students to practice and hone multimedia journalism skills through an annual summer fieldwork class on the Navajo Nation.

The fruits of the students' hard work will be premiered and celebrated next week here on campus. The event is free and open to the public. 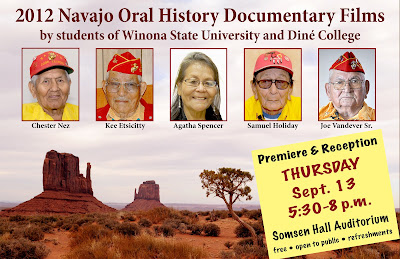 Following this reception, the WSU students involved will travel to the Navajo Nation to host a reception-premiere at Diné College.

A special "Thank You" to the WSU Mass Communication Department and the WSU Foundation for continued support of this important project.