The life stories of four Navajo elders are featured in student-made documentary films that will be premiered at Winona State University on Thursday, Oct. 6, beginning at 5 p.m. in the auditorium of WSU's Science Laboratory Center.

A second reception and premiere event will be held at Diné College in Tsaile, Arizona, on Monday, Oct. 10, beginning at 5 p.m. in the fourth floor classroom of the Ned Hatathli Museum.

Seven WSU Mass Communication students collaborated with five students from Diné College, the tribal college of the Navajo Nation, to research, interview, photograph and video record Navajo elders over a 16-day period in June 2011. The students, participating in the 2011 Navajo Oral History project, wrote, edited and produced documentary films that will be archived at the Navajo Nation Museum and Library.

The documentaries were part of a collaborative project led by Dr. Tom Grier of WSU and Dr. Miranda Haskie of Diné College. The WSU students stayed at Diné College's main campus in Tsaile, Ariz., while working on their projects. This is the third year of the Navajo Oral History program.

Student teams completed service projects for the elders and interviewed each elder several times. They also interviewed friends, colleagues and family members and did background research while on the Navajo Nation.

After the premiere events, short versions of the films will be available for viewing on the WSU Mass Communication department's news lab web site: Winona360.org.

The premieres will include comments from faculty and students involved and the featured elders. Light refreshments will be served before the presentation of the films. The reception and premiere events are free and open to the public. 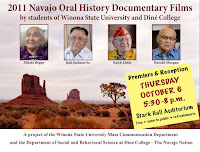