Every once in awhile, I check the analytics about this blog: things like how many people visit the blog, how long they stay, where they visit from-- geographically, etc.  I can't see individual people or  anything like that, so don't worry; your privacy is safe.  I do see general aggregated data.

I've noticed many people have visited the blog during the past week... I imagine they are hoping to see drafts of the Navajo Oral History projects from summer 2012.

No drafts are available for viewing yet... but they're getting closer to being done.

Five journalism teams are doing documentary projects on five Navajo elders this summer.  The teams are made up of students from both Winona State University (Winona, Minnesota) and Diné College (Tsaile, Arizona).  The Winona students spent nearly three weeks in June on the Navajo Nation working with their teammates to research, plan, record, photograph, write, edit and produce the documentaries.

Since returning to Winona, the WSU students have continued to stay in touch with their Diné College counterparts via ITV, telephone, email, Skype and high-tech MetNet sessions where they watch video drafts and make edits together.

The teams have been working on a Living History documentary, 15-20 minutes in length, about their elder and his or her stories of life, family, work, etc. Each group is also producing a Media Feature, a 3-5 minute program, including one or two of the elder's most interesting stories.

To recap, the elders being featured this year are: 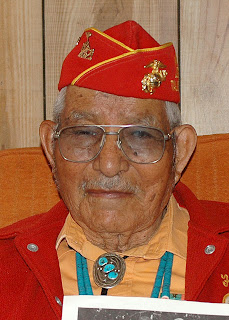 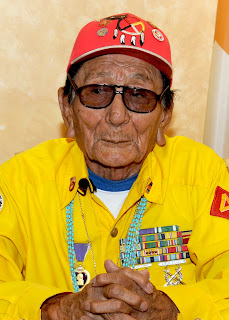 Chester Nez, a Navajo Code Talker during World War II and the last of the Original 29 Code Talkers who helped develop the code 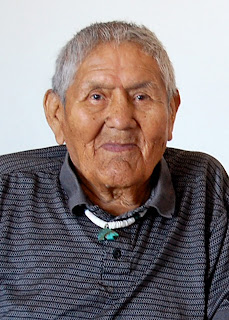 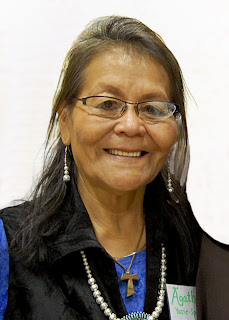 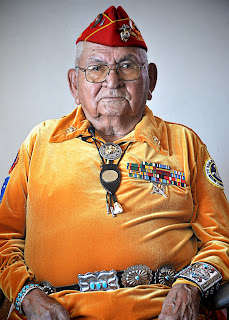 In each of the first three years of the Navajo Oral History project, we planned to feature one Code Talker, and one long-time or recently retired Diné College employee.  For the fourth year of the project, during Summer 2012, organizers decided to feature several Navajo Code Talkers.  This is partly due to a sense of urgency because these American heroes are leaving us too fast, and their stories deserve to be told.

Chester Nez of Albuquerque is the sole surviving member of The Original 29 Navajo Code Talkers.  After those 29 helped create the code and test it in the field of battle, approximately 400 other code talkers served during World War II.  Of those, estimates are that 30-40 are still alive and active in the Navajo Code Talkers Association.

That helps explain why four code talkers were focused on for the current year's projects.

The documentary projects should be complete by the end of this week (July 20, 2012).  They will be checked and double-checked by the program's faculty members: Tom Grier, Miranda Haskie and Robbie Christiano.  Once they are completely approved, DVD copies will be professionally duplicated and printed.  This will take a few weeks to prepare the master DVDs and the printed materials and get them duplicated.

Reception and Premiere events are planned to show the finished films and to celebrate and congratulate the students' hard work.  Once the films have been premiered at those reception events, copies of the Media Features will be available for viewing on the WSU Mass Communication Department's student feature web-site: Winona360.org.  (Previous years' features are still available for viewing there.)  The student groups may also post their documentaries on YouTube or other web sites.

The Winona reception is scheduled for Thursday, Sept. 13, at 5 p.m. (place on campus to be determined). The reception at Diné College's Tsaile, Arizona, campus will be held Monday, Sept. 17, at 5 p.m. in the Student Union Building.

At both receptions, there will be refreshments: snacks and beverages at Winona State; a full traditional Navajo meal at Diné College.  Each student-produced film will be shown, followed by comments from the filmmakers.  For the Diné College reception, the featured elders have been invited, and will have a chance to speak about their participation in the projects.

Please put these dates on your calendar and plan to attend one or both of the reception events.  They are free and open to the public.

Following the receptions, DVD copies of the documentaries will be given to each featured elder and to all participating students.  Copies will be archived at the Navajo Nation Museum, Navajo Nation Library and the libraries at both Winona State University and Diné College.  The Winona Public Library will have copies.  We're proud that the films will be archived at the Smithsonian Institution's National Museum of the American Indian.

Copies of the DVD featuring the full series of 2012 films will be available for sale at $20 each. The entire $20 from the sale of each DVD will go into a scholarship fund at Diné College.

One of the key points of the project is that the participating students sign an intellectual property release form, giving the rights to the documentaries to the Navajo Nation for all time.  Students have agreed they won't make any money on the projects.  Their hard work is a gift to the Navajo people.  The documentaries will become important historical documents.

What the students do get is a sense of satisfaction that they are making a difference in the world.  They also have the ability to use the projects in their own portfolios to show potential employers their abilities and cultural sensitivity.

More information about the receptions will appear here on the blog in the coming weeks.  Soon after fall semester begins in August, the blog will become a place to promote participation in the fifth year of the Navajo Oral History project in Summer 2013.

Students who may be interested in participating next summer should contact WSU Professor Tom Grier (tgrier@winona.edu) or DC Professor Miranda Haskie (mhaskie@dinecollege.edu). There are a limited number of spaces open for students and they will fill quickly.

Thank you to all who have followed the blog throughout the summer.  We appreciate your attention and support.

Posted by DoctorTom at 12:57 AM No comments: