The Spring 2014 edition of The Tribal College Journal, "the scholarly voice and vision of American Indian higher education," featured an article written by Dr. Tom Grier that focused on the first five years of the Navajo Oral History Project.

The article features several photographs by Winona State University alumni who were student participants in the NOH project over the years. It also includes links to five documentary films created by WSU students in collaboration with students of Diné College, the tribal college of the Navajo Nation. 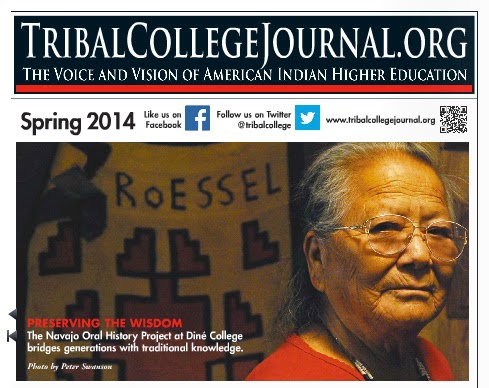 In the article, Grier, a professor of Mass Communication at Winona State University, traces the multi-year process of gaining approvals from a variety of Navajo Nation officials before the project could begin. Then he describes the five-years of field work he led along with Dr. Miranda Haskie, a professor of Social and Behavioral Science at Diné College. In the third, fourth and fifth years of the project, Haskie and Grier relied heavily on support and help from Robbie Christiano a graduate student and Winona State alumnus.

The Navajo Oral History project completed its fifth year in summer 2013. The leadership team is now working to renew agreements between the two partner higher education institutions and expects the program to begin a second five-year term in summer 2015.

You can read the full text of the article and follow the links to the films through the Tribal College Journal's web site:

Posted by DoctorTom at 1:27 AM No comments: