About 750 miles driven today along the backroads of the Great Plains and into the southwest United States.  I stopped to photograph 17 different county courthouses, some old, stately and beautiful, and others modern and more like mini-malls.

Three buildings tied for the oldest (1890).  To be fair, I must display all three. 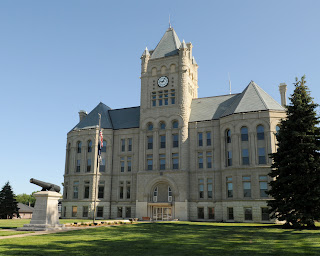 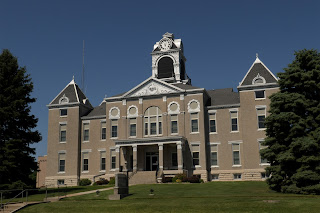 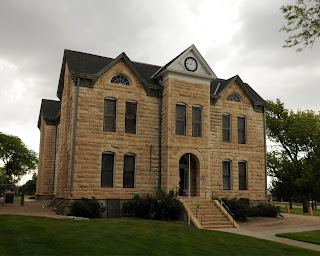 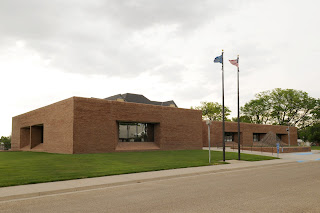 The citizens of Greeley County, when they needed a new courthouse in 1975, built it adjacent to the old one.  You can see the roof of the old building in the background of this photo of the newer building.

Rather than tear the historic building down, they maintained it and turned it into the Horace Greeley Museum.  The museum was closed for the day by the time I got there.  The name of the town and museum caught my attention.  I did some checking on the internet and found that both the county and the town were named in honor of the famous founder and editor of the New York Tribune who was a great supporter of U.S. expansion west.  Horace Greeley was born in 1811 and died in 1872, one year before Greeley County was established.  Greeley famously said, "Go west, young man" and many did. And, each year, so do I.

There's another town in Greeley County, Kansas, named Horace.  Apparently,  early citizens of the county really liked Horace Greeley.  Or maybe they just ran out of ideas.  I can't help thinking of Brick Tamland played by actor Steve Carrell in The Anchorman movie: "I love lamp."

Amazing what you can learn if you get off the interstate and poke around a bit.  I guess that's the journalist in me.

Now back to your regularly scheduled blog about the 2012 Navajo Oral History Project.

On Sunday, June 3, 2012, I'll meet the Winona State University students at the Albuquerque, New Mexico airport and we'll all drive together to Tsaile, Arizona, on the Navajo Nation.  We'll stop for dinner in the Nation's Capitol, Window Rock, Arizona.

After getting checked into the residence hall at Diné College in Tsaile, the students will get a good night's rest and be ready to begin their journalism adventure on Monday morning.

Posted by DoctorTom at 6:03 AM