The van was loaded yesterday with all the gear we need for our Navajo Oral History project documentaries and today (Thursday, May 13, 2010), I hit the road heading west.

I drove out of Winona on I-90, and literally within one mile of getting on the Interstate, it started raining, and the highway was down to one lane due to road construction. The orange road construction barriers continued for many miles, and the rain continued for almost the entire time I was on the road today. There were a couple short respites from the rain, but they were brief.

Along the route, I made a few stops to photograph some beautiful old courthouses in some small towns. I've long had an interest in the stately old courthouses that serve as a real centerpiece for many communities. 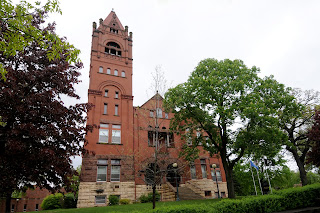 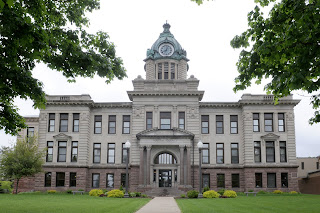 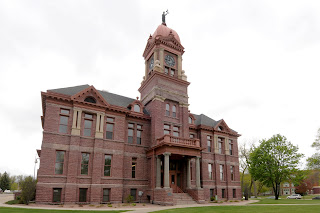 For the past few years, whenever I travel, I try to get off the four-lane freeways and follow the smaller U.S. and state highways into county seats, watching for their courthouses. Then I walk around the courthouse looking for the best angle to photograph the building. Once in awhile a local police officer or sheriff's deputy will stop and ask what I'm doing. I suppose it can look odd to see a guy like me carrying a backpack around a courthouse, and sometimes lurking in bushes or laying in a street. Once I explain that I'm a college professor who teaches photography, and that I just enjoy taking pictures of great old buildings, they smile and let me go about my business.

I've upload many of my courthouse images -- and other roadside oddities that catch my interest -- to Google Earth. More than 200 of my images have been placed in the Google Earth mapping system.

Today, In addition to several courthouses in Minnesota and South Dakota, I got a nice photo of a huge Green Giant statue in Blue Earth, Minn. 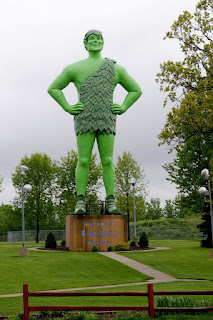 I stopped for the night in the middle of South Dakota, and plan to head south into Nebraska tomorrow.

All of this travel is fun and interesting, and I'm learning from books on CD while I drive. It's all preamble to the important work the Winona State University and Diné College students will do beginning next week on the Navajo Nation.

Posted by DoctorTom at 9:42 PM