Today was our day to do some work for our featured elders, to build a relationship with them, and then interview the elder.

The three elders interviewed today were:

- John Kinsel, a Navajo Code Talker during World War II who lives in Lukachukai, Arizona, at the foot of the Chuska Mountains. Today was the first meeting with John for the team working on his Living History feature: Marcus Lake and Revaline Nez (DC), and Michael Ruka and Jennifer Westman (WSU).

- Lettie Nave, a retired school teacher and community leader in Chinle, Arizona. If you've been reading the blog during this journey, you already met Lettie in yesterday's blog entry about our groups' camping experience with the Nave family in Canyon de Chelly. Lettie was interviewed for the second time by Sawyer Derry and Brianna Klapperich (WSU) and Ernestine Sanisya (DC).

- Grandmother Marjorie Thomas, a retired educator, asst. school superintendent, and community leader who has several times led a walk across the Navajo Nation to raise money for a youth center. The team working on Grandmother Thomas' feature who met her for the first time today consists of Robbie Christiano (WSU), Gwyndolyn Neboyia (DC) and Kelly Sharatt (WSU).

The group interviewing John Kinsel found he was eager to tell his story. They quickly set up their gear and began recording shortly after they arrived, because he had already launched into stories of his time as a code talker. He said he didn't have any chores for them to do today, but he'd probably have them remove a stump or two when they returned for their second interview. 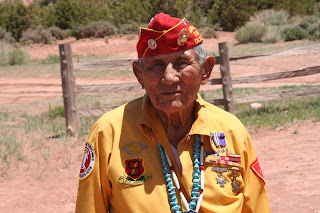 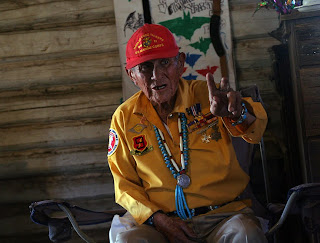 (above two photos by Michael Ruka) 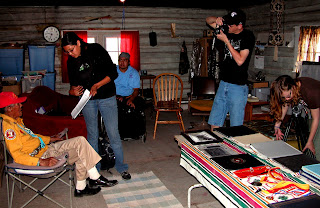 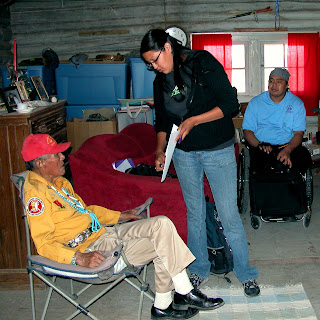 (above two photos by Miranda Haskie) 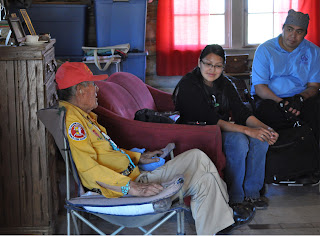 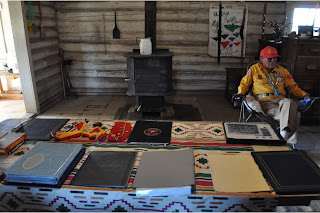 (above two photos by Jennifer Westman)

Lettie Nave said she had many chores for us to do. "You'll have to stay all summer!" she said. Her interview group dug compost holes, re-set some fence posts, picked up trash, stacked wood, and organized sheet metal and other things around her and her husband Flemin's home and yard in Tsaile, Arizona.

I was with the group that interviewed Grandmother Marjorie Thomas. We visited with Grandmother and her daughter, Leona, who assigned us to weed a flower garden and turn the soil in their vegetable garden. While weeding, Robbie and Altyn noticed a broken gate, so they repaired it. While turning the soil, Leona mentioned she wished she had time to spread manure on the garden for fertilizer. We dug several wheelbarrows and trash barrels full of manure and turned it into the garden soil. Ben, Kelly and Altyn helped feed the cows and Altyn repaired another section of fence that was falling down. 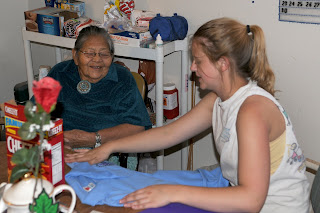 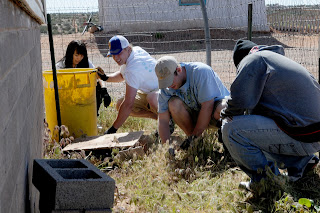 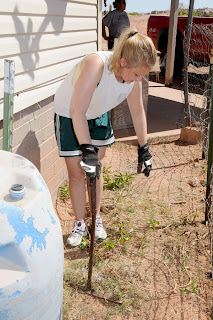 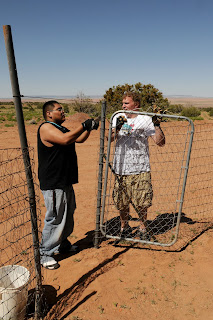 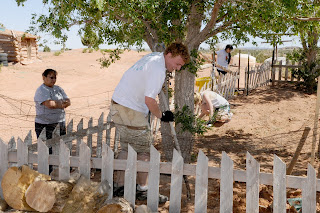 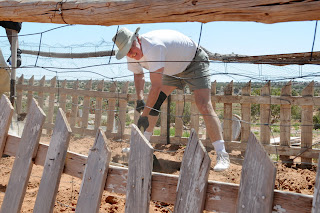 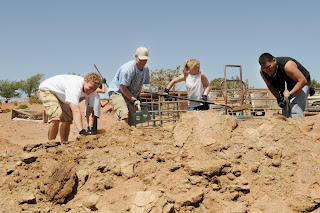 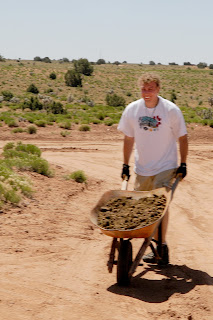 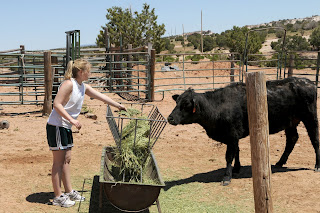 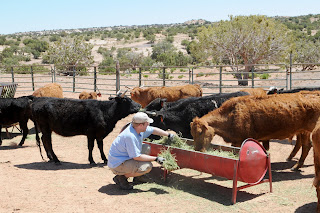 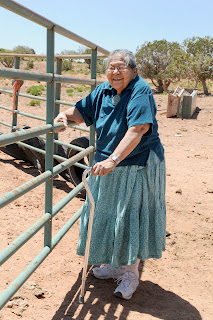 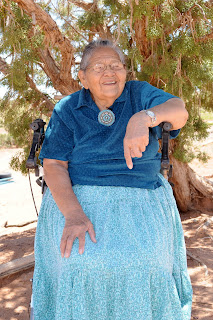 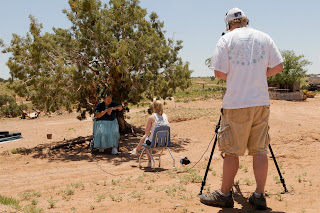 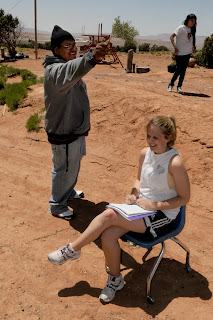 (In the above photo, Altyn was using a small branch to try to shade Kelly's already sunburned shoulder.)

The fourth group, which will have their first interview with their Navajo elder tomorrow, consists of Ben Chambers (WSU) and Altyn Burnside and Shaina Nez. Since they didn't have an interview today, they came along to Grandma Thomas' Hogan and helped.

It was a day of hard work and sweat, but it felt good to be helping the elders and knowing we were making a positive difference in their lives. The interviews went well and the students all felt they gathered great material for their documentary projects. They started working on photos and video and audio interviews immediately upon returning to the Diné College dorms.

Brianna Klapperich and Robbie Christiano made a great dinner with an Italian theme: spaghetti with either alfredo sauce or a tomato sauce, with chicken, mushrooms, zucchini, tomatoes, and salad. After everyone was satisfied, we all went outside for a fun game of disc golf around the DC campus.

Later in the evening a group watched a movie on a laptop computer, while others continued to work on their projects. 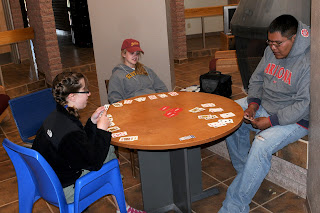 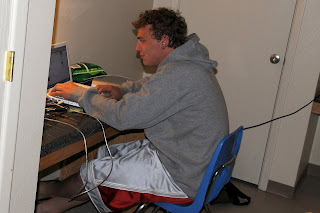 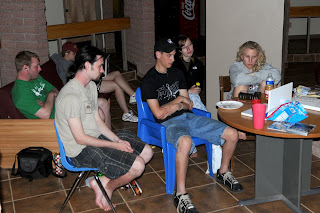 Everything is going great.

I have a theory that even if activities don't go exactly as planned, things naturally work out for the best here on the Navajo Nation. Example: While driving to Grandma Thomas' place, I spotted a tool in the middle of the road. I stopped to pick up the tool to help other drivers avoid tire damage. It was a fence-mending tool, which we ended up needing as we worked on Grandma Thomas' gardens.

As always, thanks for reading these blog posts and keeping up to date with our activities. Feel free to add your comments below. I noticed today that the blog site has had more than 800 page views in the past three days. I know the students really enjoy knowing that their friends and family are following along.