Today (Sunday, May 23, 2010) was the day of the second interview for two of our Navajo Oral History groups: One in Chinle, Ariz., with Grandmother Marjorie Thomas; and the other with Andy Brady, in Shiprock, New Mexico.
Most of our class of Winona State University and Diné College students went to Chinle to help with a couple projects around Grandmother Thomas' place. Robbie Christiano and Kelly Sharatt interviewed Grandma while Sawyer Derry and Ernestine Sanisya looked on. 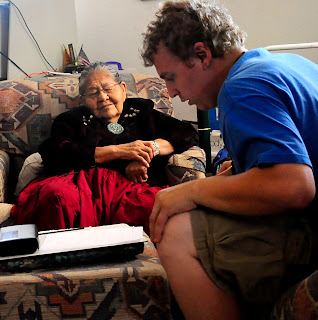 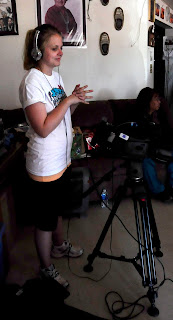 (above two photos by Sawyer Derry)
The service projects today were related to water, an extremely precious commodity here on the high desert. Prof. Tom Grier replaced a cracked hose fitting and seals on the side of the Thomas' hogan then Grier and Michael Ruka helped repair a couple broken valves on some water holding tanks that Grandmother and her daughter, Leone, use to provide water for the cattle. 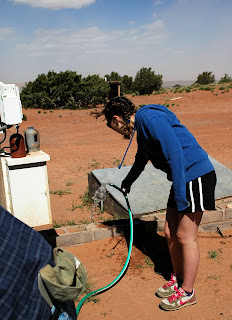 (above photo by Brianna Klapperich)
One of the valves was slightly cracked and rusted in place. We had to chip at it with a hammer and screwdriver to remove the old one. Then we used a wire brush to clean up the threads. Michael used a file to re-groove a thread or two. Then the valve fit just fine. 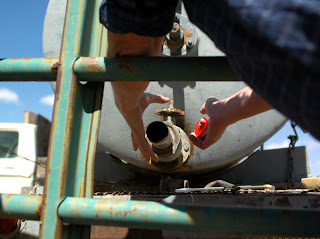 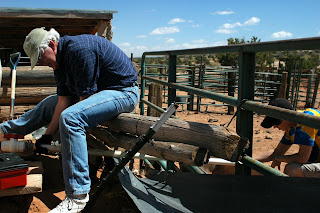 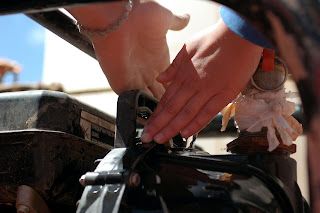 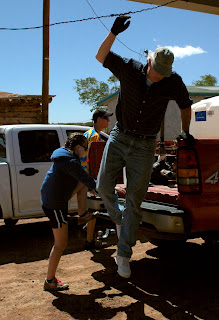 (above four photos by Brianna Klapperich)
Leone asked us to help her go fetch water. The family has tried for years to get a permit to drill a well on the property, or to get the government to run utility water to their place, about four miles outside of the main town of Chinle. Until that is settled, they have to fill water tanks from a community well/tank about two miles away. 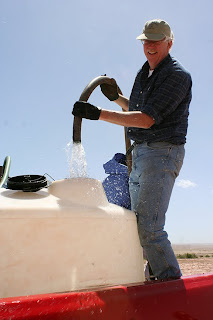 (above photo by Michael Ruka)
We helped load a 450 gallon water tank into the bed of her pick-up along with a couple sections of large hose, and a gas-powered pump. Leone drove us to the water tank, almost getting stuck in a sand dune on the Chinle Wash which is now totally dry. 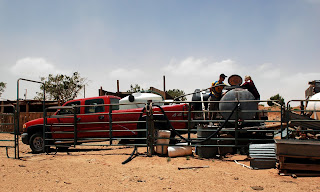 To make matters worse, the wind is steady at 30-35 mph, with gusts to 50 mph or more. The sand flying through the air hurts and blinds. In the truck, it's like driving through fog. Sometimes you can't see more than a city block in any direction because of all the sand blowing. The strong winds also caused several power outages on campus during the afternoon. Leone said this is quite normal, with big wind storms like this occurring several times a year. 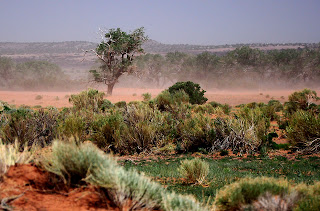 (above photo by Sawyer Derry)
On the way to the water Leone told us about how often when people get to the tank, it's empty and they either have to go somewhere else much further away, or simply wait several hours until the tank refills from the well. She also said there is often a line-up of vehicles waiting to fill water tanks. Leone said her son would often go get water at 1 or 2 a.m. to beat the rush, especially during the hotter, dryer months. 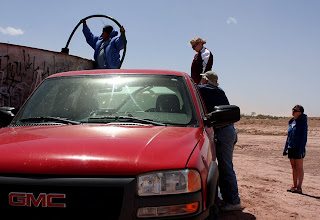 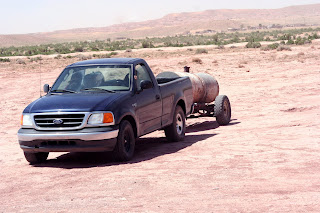 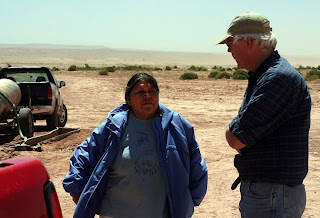 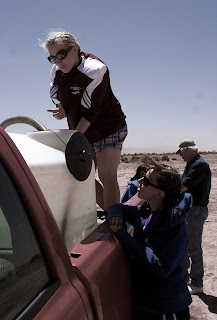 (above four photos by Michael Ruka) 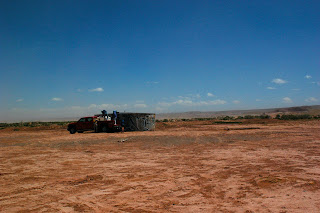 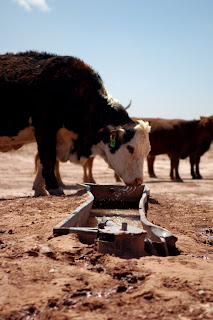 (above three photos by Brianna Klapperich -- the last one is a huge multi-image panorama of the dry wash and well water tank near Chinle, Arizona.)
This conversation made me mad. In 1935, the U.S. Government created the Rural Electrification Administration (REA) with a goal of providing electricity to even the most remote homes and farms in our country, with the idea that electricity was a need, and a value that should be available to all Americans. Well, at this moment, in 2010, many Navajo homes still have no electricity. But let's set electricity aside for a moment. People can live with out that. But Water??? Isn't that an absolute Need? How can we sit by when thousands of Americans (not only on the Navajo Nation) don't have access to fresh, clean water?
I asked Leone what's the real problem? Money. How much would it take to run water lines to these homes? $100 million? $500 million? $1 billion? How much did we spend in Iraq and Afghanistan in the past six months? $50 billion or so? Hmmmm.
I don't mean to get too political here, and this isn't about whether the war is right or not. It's just about our government helping to ensure that basic needs of all Americans are met. That's one of government's primary jobs ... to my way of thinking.
I'm going to write to Arizona Senator John McCain, and President Obama. I'm going to ask them to come to the Navajo Nation and spend a day with Grandmother and Leone Thomas and help fill their water tanks and see the line-up of vehicles waiting for water. Then, we'll see if they can help fix this. Probably won't do any good, but it's worth a try.
Okay, I'm stepping down off my soap box.
We were glad to help and in fact all felt pretty good that we were making a positive difference in the lives of the Thomas family. Sure, they can get their own water. But Grandmother is having some health issues and can't walk as well as she once did, often using a walker or a cane. And Leone is taking care of the place and her mother since Grandmother's husband died two years ago. It is a lot for her to handle. They were so happy about the work we did for them, they bought us all lunch today at Church's Chicken. Leone WAS going to barbecue mutton for us, but the wind and sand were too bad. 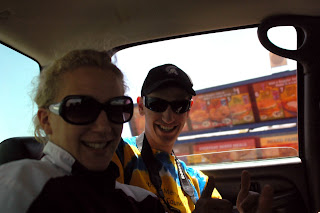 (above photo by Jenn Westman)
The other group: Ben Chambers, Altyn Burnside and Shaina Nez, went to interview Andy Brady, and his son and grandson, to fill in the Living History piece on Andy. They got some great video of the three of them, including environmental shots around the farm. They also shot some video of the San Juan River, which flows through Shiprock. Andy has long been involved in fighting for Navajo rights to the water that flows through the reservation and their town. I'm sure you'll hear more about this in the finished feature on Andy.
After both groups got back to the Diné College residence hall Hogan, Sawyer Derry and Tom Grier cooked a family style dinner of Tex-Mex Chicken-Turkey Chili, Salad, and Garlic Cheese Bread. Everyone said it was delicious. Either it was good, or they were too polite to tell the truth. In any case, every bit of the chili and the cheese bread were eaten. 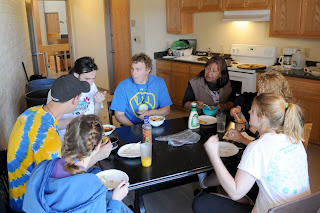 This blog entry has gotten way longer than originally intended. Thanks for hanging in there and reading (if you're still here). I hope you enjoy the blog and feel closer to our project and the student's efforts. They are really working hard; and having fun.

See some of the photos from today, below.

(Next six photos by Sawyer Derry) 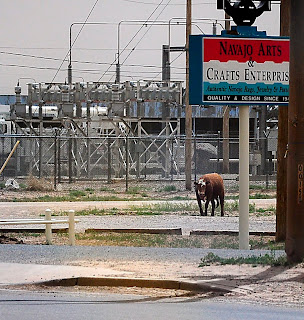 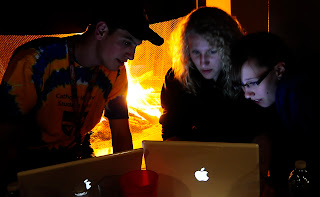 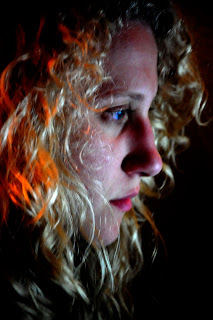 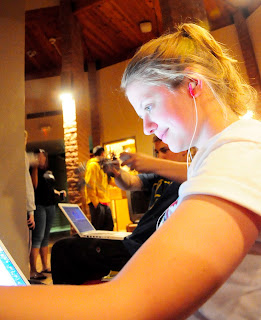 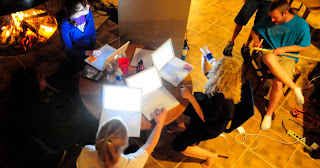 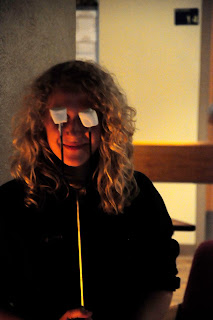 (next photo by Robbie Christiano) 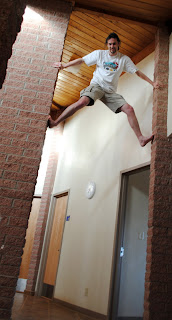 (next three photos by Michael Ruka) 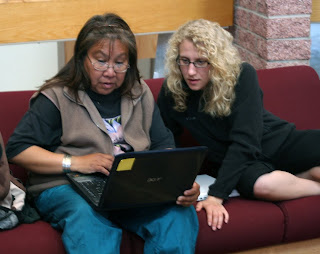 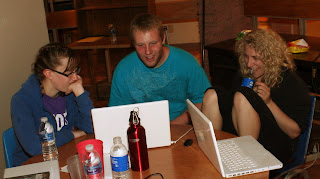 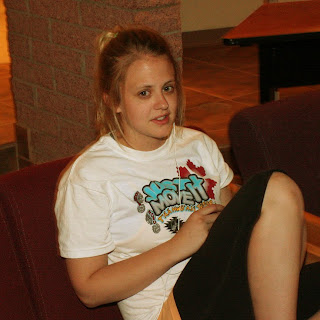 (the next two photos by Brianna Klapperich) 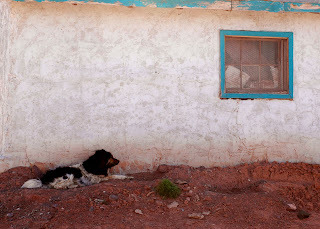 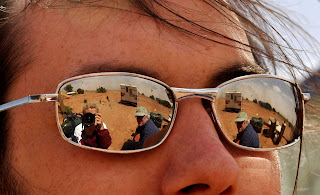