We held the first premiere event and reception at Winona State University tonight (Friday, Sept. 13). About 150 people were in attendance, including WSU students, faculty, staff, neighbors and family and friends of the students who produced the films.

In addition, about 20 alumni, representing each of the five years of the project, attended.

This past summer, a group of students from WSU and Diné College, the Tribal College of the Navajo Nation, worked in collaborative teams to create documentary films focused on the life stories of five Navajo elders. The students researched, photographed, recorded, edited and produced the films which were premiered tonight.

After each film was shown, the student filmmakers spoke about the process and the privilege of meeting the elders and helping to preserve their life stories for all time.

The films will be archived at the Navajo Nation Museum and Library, The WSU Library, The Diné College Library, and at the Smithsonian Institution's National Museum of the American Indian.

A second premiere event will be held Monday, Sept. 16, beginning at 5:30 p.m. in the Student Union Building at Diné College in Tsaile, Arizona, on the Navajo Nation.

If you are in the Four Corners area on Monday, please come and enjoy refreshments and some really great films. 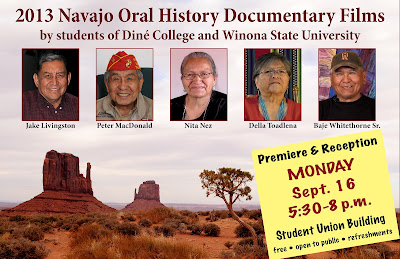 The faculty members agreed that the films are excellently produced and important historical documents. Thanks to all the students involved in this year, and each year, of the Navajo Oral History Project.
Posted by DoctorTom at 12:35 AM