Day 5 - Interviews and a Navajo Rodeo

Every day on the reservation is a good day. Each day we enjoy great weather and lots of good feelings because we know the work we are doing is important and valued here on the Navajo Nation.
We started early this morning with a drive to Crystal, New Mexico, to meet with Keith Little, a World War II Navajo Code Talker. 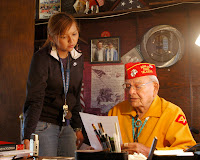 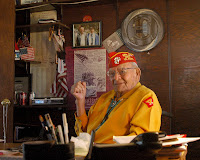 (Above two photos by Shawn Tsosie)

It was an amazing interview. In 2000, Mr. Little earned a Congressional Silver Medallion for his service to our country. He served as a radio man all over the South Pacific using the code devised around the Navajo Language. The code was never broken by the Japanese and certainly helped shorten the war and save lives.
We learned that Keith served for a time on Roi-Namur, a pair of islands on Kwajelein Atoll, a part of the Marshall Islands. My father also served on Roi-Namur in WW II, in the Navy Seabees (construction battalion). Keith was part of the Marines who cleared the islands of the Japanese before the Seabees would come in to build runaways to make U.S. plane refueling quicker and easier. 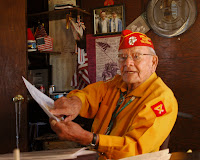 As you can imagine, it was quite an honor for me to hear him tell stories about his efforts in the War that surely helped protect my father and so many other U.S. military people. The students on the team interviewing Keith Little felt honored as well. They are: Robbie Christiano, Jessica King and Shawn Tsosie. 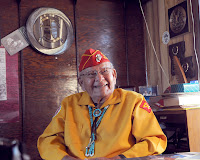 While the team interviewing Keith Little was in his office doing their work, the other students were able to enjoy playing with a puppy named Oreo at his place, and hike in the hills of Crystal, New Mexico. 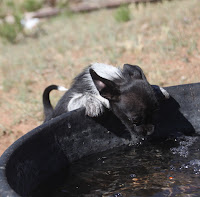 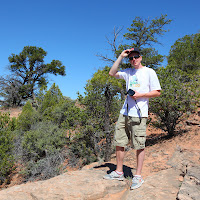 (Above four photos by Michael Ruka)
After the interview, we spent some time at The Navajo Times newspaper office doing archive research to find past articles which included our featured elders. We also did some archive work at the Navajo Nation Library. 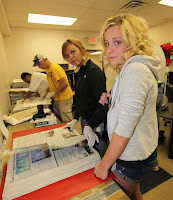 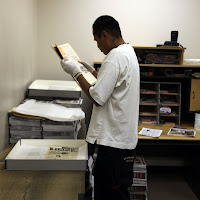 (above three photos by Michael Ruka)
We spent a little while in the afternoon at the Flea Market in Window Rock, Arizona. 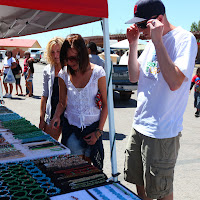 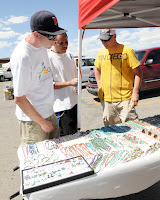 One group also shot some B-roll video of the church where one of our feature elders, Jack Jackson, and his wife were married years ago.

(Photo by Alex Fisher)
B-roll is the term used for additional video, other than on-camera interviews, of places or things that help explain or amplify the main idea of a news feature.
In the evening, several of our group drove to Rough Rock, Arizona, to attend a Central Navajo Rodeo Association (CNRA) Rodeo. We saw barrel racing and bull riding events.
It was another day of good work, fun, laughter and friendship.
Saturday's plans include horseback riding with a Navajo Guide to cultural sites within Canyon de Chelly National Monument in the morning, and a cook-out with Miranda and Vernon Haskie and their family high in the Chuska Mountains above Lukachukai, Arizona. I'm told we'll also be shearing sheep.
Saturday evening should be quiet back here in the Diné College dorm and should allow me to get the blog caught up with many more photos from the students.
Thanks for your interest in the blog and our activities.
Posted by DoctorTom at 12:40 AM